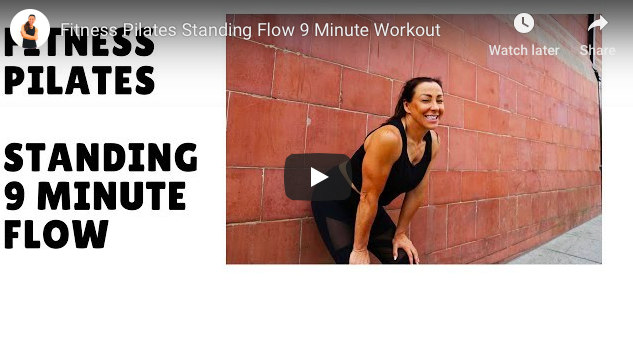 A 9 minute standing Fitness Pilates Flow routine designed to strengthen and lengthen the whole body in a functional capacity.

Take it easy for your Monday workout with this great 9 minute workout- its quick and will leave you feeling lengthened and relaxed !

Fitness Pilates was created by Rachel Holmes in 2002 as a fitness/group exercise version of traditional Pilates delivered in a contemporary style for qualified Fitness Professionals.

It began as a workshop called Equilibrium which fused Pilates with Stretch and Yoga and transformed into Fitness Pilates in 2002/2003.

Rachel began running workshops and training course around the UK, Europe and North America from 2003.

The training updates annually and incorporates new exercise and movement science but has its roots firmly in traditional Pilates and Controlology.

Do you teach group exercise?

Sign up to our weekly newsletter delivered to your inbox with class content ideas, workouts to use in class, choreography, the latest course and event information, Fitness Pilates updates, music ideas, Social media,business ideas, marketing, PR, pricing your services,creating an online service of your clients PLUS support and motivation.

You have Successfully Subscribed!

No comments so far.